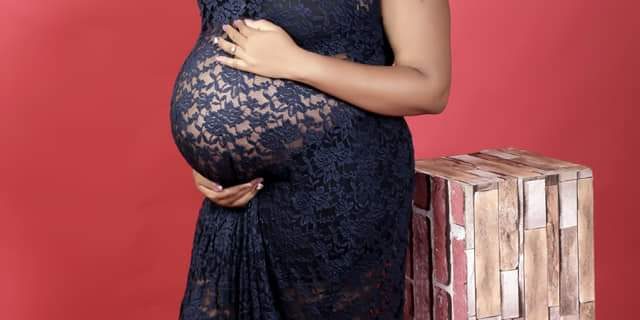 SANDRA HARRISON: “Some single women bury their potentials for fear of chasing men away; it’s wrong. Chase your dreams and be the woman you were meant to be and the right man would be attracted to you.”

Sandra got married in 2012 and had nineteen (19) miscarriages in six years. When it hit nineteen miscarriages, she stopped counting but still lost some more pregnancies about four or five more times after that. She was in and out of hospitals spending close to Two million Naira on drugs; she was in and out of churches, in and out of places offering herbal remedies.
Her problems escalated with each passing day and so many people continued to insult her and call her names. Some said she was barren, some said she had eaten her children in the dead of the night, some said she had a bad character which was why “God withheld children” from her. Some called her a man, and some still called her several terrible names.
The various doctors and herbalists had different diagnosis to explain her so-called problem. Some said she was suffering hormonal imbalance, some said she had a “hot waist” which made it impossible for children to stay, some said she had fibroid, and some still said she had a shifted womb.
Sandra recalls that the “shifted” womb experience was a particularly horrific one because the person claimed the womb had to be moved back into its right position manually. The person grabbed her stomach and began to squeeze and press and grind in the name of moving her womb back into place. Sandra recalls that the pain was debilitating and she had been forced to bear it since a child was the ultimate goal.
Sandra recalls that one time she had been taken to yet another herbal treatment center only for her to discover it was actually a voodoo doctor and not even just a herbal therapist. He wanted her to cross a long black thread on the floor and ordered that she had to make sure water didn’t touch it; that effort failed as well.
Things were not much rosier emotionally either as people continued to pressure her husband to take all manner of decisions because she was a “man,” a “wood,” “infertile” and so on. Relatives and “friends” outdid themselves, gossiping about her; some said she didn’t “greet” neighbors which was why she didn’t have a child; some said she ate her womb; and some just peddled as much rumors as their mouths could carry. Someone even advised her to stop catering as it could be the cause since women who cooked a lot “cooked their wombs in the hotness of the fire.” Finally, Sandra lost the ability to sleep at night, she underwent a lot of psychological issues and became a shadow of herself; several times she actually contemplated running away to where no one else knew her. She gained tremendous weight from hormone drugs to no avail. She even arrived at a stage where she thought God had a special hatred for her and the constant cry on her lips was “why me”?
Somehow she channeled her frustration into business and started a business by selling her own used jewelry; it blossomed into a huge business named Sandy’s Place. Before long, Sandy’s Place was supplying high-end jewelry, clothes, skincare products and bags. It quickly became a solid business with an impressive customer network.
Finally, a prophecy came in June 2017 that she would conceive and bear a child. Sandra held onto it and reconciled with her husband. In December 2017, she was pregnant again. Sandra was so scared of yet another miscarriage that she quit her business for the entire duration of the pregnancy and some months after her childbirth as well. Sandra confided that she carried her pregnancy to term to the surprise of so many who had written her off.
Her baby, Chizaramekpere (God answered my prayers) has been a constant source of joy, favor and blessings to her and her family and Sandra can’t stop gushing about the pretty little baby she was gifted with.
She admits that career-wise, she had lost some customers as a result of her one year’s absence but some loyal customers stayed. Sandra recently got a job and is in the process of trying to rebirth Sandy’s Place as an online venture and she opines that “Women should ensure they have a source of livelihood; no matter how little. Never depend fully on anyone else. Even if you want to be a housewife start an online business.”
Sandra confides that she had experience in events management, and catering and so many other entrepreneurial abilities. She also organizes a scheme aimed at empowering women by getting ten women to contribute N50,000 each per month and handing the entire sum each month to one of the women strictly for a business venture. Sandra’s baby Chizaram is her pride and joy and a cute one at that; Sandra believes strongly that women should be engaged in business or career rather than being idle for any reason at all.
Her parting words? “Whatever you are passing through as a woman, you’re passing through it because you are a woman and you are strong enough to handle it. You’re more powerful and patient than the opposite sex so don’t look down on yourself and don’t fall into the ‘why me’ depression.”
#CelebratingStrongAfricanWomen #CSAW #AfricanKidsAndWomenRightsEmpowermentInitiative
#AKAWI
NB: DO YOU KNOW ANY STRONG AFRICAN WOMAN WHOSE STORY OF TEARS AND TRIUMPHS CAN INSPIRE OTHERS? PLEASE INBOX US A NOMINATION OR EMAIL akawi@akawi.org. WATCH THIS SPACE EVERY FRIDAY FOR A FRESH STORY OF AN AFRICAN WOMAN MAKING A DIFFERENCE IN THE WORLD. AT THE END OF THE YEAR ONE OF OUR NOMINEES WALKS AWAY WITH AN AWARD AND MONETARY PRIZE.